This post is dedicated to a couple of young people I know who struggle with the idea of having to get things right the first time. 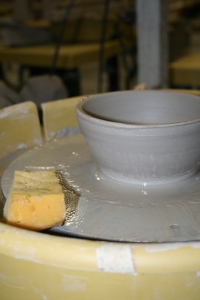 I’ve been taking a ceramics class for fun and to explore another creative outlet. For the last few weeks, we’ve been hand building different kinds of vessels and forms. But on Monday, we switched to throwing on a pottery wheel. My instructor made it look so easy, demonstrating how to center the clay and pull the sides up into a cylinder.

Then it was our turn.

We sat at our wheels and tried to coax cylinders out of our own lumps of clay.

To be fair, a couple of people did quite well. But most of us…well, it took several attempts before we got anything not wobbly, let alone cylindrical.

It was frustrating. Humbling. More than once I thought, There’s no way I’m going to be able to do this.

But each time my walls grew too thin or my cylinder lost its center, I crumpled the clay back into a lump, scraped the excess from the wheel and started again.

It took a few tries, but finally, working slowly, I threw a cylinder.

Will I be able to do it again next time? I don’t know. But I’m willing to keep trying until I learn.

That’s what it’s like for starting any project. Writing a first draft of a story. Starting a new painting. Sculpting clay by hand or on the wheel.

You don’t have to get it right the first time. Few people do. The magic happens in the revisions and later attempts.

So go easy on yourself. Give yourself the freedom to try and grace when you fail.

And never, ever stop learning.